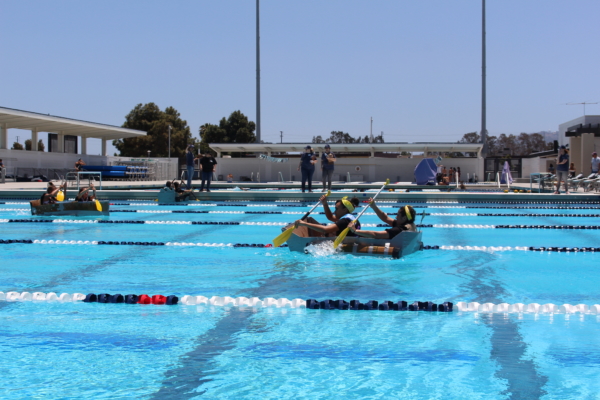 Off to the races!

More than 150 emerging female engineers from the Torrance Unified School District (TUSD) put their skills to the test during the second annual “Cardboard Regatta” on June 1 at the school district’s new aquatic center. Their challenge – design and construct a navigable watercraft for competition using only tape and cardboard boxes.

The young ladies were divided into 28 teams from six TUSD schools and given a few weeks to design their vessels. Then, the teams came to the aquatic center and under pressure from the clock, constructed and decorated their boats in only three-hours, and raced them across an Olympic-sized pool – whew!

After all scores were tallied, the top-three teams were acknowledged for their achievements: first and second place went to teams from Casmir Middle School and third place to a team from Madrona Middle School.

During the competition, the girls paused for lunch and listened to a motivational talk from Torrance Refinery Capital Projects Manager and Industrial Engineer Jill Entner. Jill is an advocate for women and active in the Society of Women Engineers, which honored Jill with the organization’s Emerging Leader award in 2017. Jill encouraged the competitors to pursue careers in engineering and to “play like a girl!”

“I was thrilled to have the opportunity to share my advice to ‘play like a girl’ with these students and encourage them to have their own voice and bring forward the diverse ideas that the engineering field needs from underrepresented groups,” said Entner. “Our refinery is pleased to share our professional women as mentors and role models for this event to help build self-confidence in these young ladies and inspire them to pursue their engineering passions.”

In addition, the students asked questions about engineering careers during an open panel discussion with several Torrance Refinery female professionals. At the conclusion of the event, each participant received a certificate of recognition signed by representatives from TUSD and Torrance Refining Company.

“We started the Regatta to give our girls the opportunity to take part in a female empowering competition. We wanted to help spark their interest in Science, Technology, Engineering, and Math (STEM) and give them the tools they need to solve real life problems through the engineering design process,” commented Ton and Rashid. “Partnering with the Torrance Refinery this year allowed more females to participate in the event. Last year, we hosted 50 students, but with the help of the Refinery, we were able to expand the event to include 180 female students from our district.”

The Cardboard Regatta is making a big splash and quickly becoming a popular annual event, so be sure to tune in next year to check out what our talented TUSD students have in store!

For more Cardboard Regatta coverage, check out the following links: