On May 24, a facility improvement long hoped for by the North Torrance Pueblo community came to fruition with the revitalization of the Ruben Ordaz Community Center (Center). Upgrades at the Center were completed thanks to collaboration between Torrance Refining Company (TORC), the City of Torrance, Sharefest Development Corporation (Sharefest), and the Del Amo Homeowners Association (HOA). 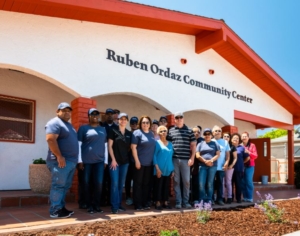 Del Amo resident Irene Ordaz originally advocated for upgrades to the exterior of the Center. Although the City recognized the need, funding was a challenge. TORC was able to finance the project and engaged the help of nonprofit partner Sharefest, which mobilized professional trade companies to perform the hardscape work, while the City of Torrance assisted with the landscaping. TORC also involved its dedicated employee volunteers and Pueblo community members to assist in the project’s final stage, planting flowers to beautify the grounds. 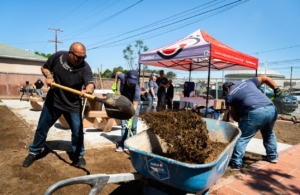 “This has been a labor of love for three years working with Mrs. Ordaz on her vision for the Pueblo community,” explained Barbara Graham, Community Relations Manager for Torrance Refining Company. “We wanted to do something special to make a big impact for our neighbors, and by partnering with Sharefest we were able to do just that. Beyond funding, our employee volunteers helped to add finishing touches to the project.”

The Center, formerly known as Pueblo Park, was renamed in 2015 to honor lifelong resident Ruben Ordaz, a former steel worker and school custodian. As past president of the local homeowner’s association, Ordaz played a pivotal role in the development of the recreation center. His wife, Irene, now serves as the current HOA president. 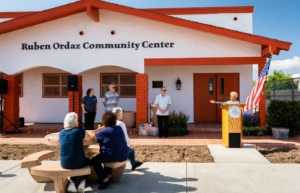 “I am so grateful to the Torrance Refinery for asking the City and Sharefest to help us with this project, said Irene. “I have been asking for this for many years; our community built this facility years ago. We are happy to have it fixed so our kids in this neighborhood can enjoy it too. Thank you!”

This remarkable collaboration earned a commendation in July when the City of Torrance Community Services Department presented TORC with its “2019 Distinguished Organization in the Community Award” for its critical role in revitalizing this community space.  As City Commissioner Andrea Reilly shared, “Because of the extremely generous donation from the Torrance Refining Company, these improvements have benefited the entire Torrance community. Over the years, the City of Torrance and the Community Services Department have maintained a wonderful relationship with the Torrance Refining Company.”

To learn more about the project, visit: Torrance CitiCABLE’s This Week in Torrance 27.19