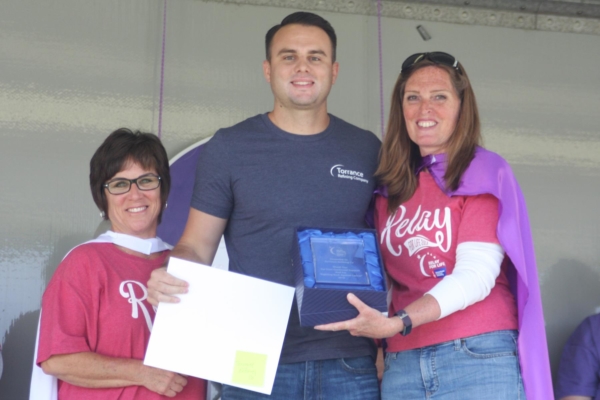 The 16th Annual Relay for Life – Torrance kicked-off at the South High School track On Saturday, April 21. During the event, teams walked or ran continuously for 24-hours to raise money for the American Cancer Society (ACS). This year, the Torrance community rallied to raise $232,000 (and counting), surpassing the event’s fundraising goal by over $20,000…way to go Torrance! The Torrance Refining Company LLC (TORC) was pleased to support the event as a Bronze-level Sponsor.

TORC Community Relations Advisor Brandon Matson represented the Torrance Refinery at the Relay for Life’s opening ceremony, which included welcoming remarks from Torrance Mayor Patrick Furey, a moving testimony from a local cancer survivor, and the official opening lap of the relay, known as the “survivor lap,” during which hundreds of cancer survivors and their caregivers walked in unison to kick-off the relay.

The event Sponsorship Lead Michelle Rand expressed her appreciation for the refinery’s support. “We are truly grateful to the Torrance Refinery for its continued sponsorship to further the ACS Relay for Life’s mission to celebrate lives, save lives and lead the fight for a world without cancer,” said Rand.

Over its 16 year history, the event has raised $2.9 million! To learn more about how to get involved with the Relay for Life – Torrance, checkout its website by clicking here.