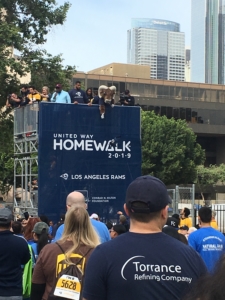 As a major sponsor of the United Way of Greater Los Angeles’ (UWGLA) “2019 HomeWalk,” Torrance Refining Company (TORC) continued its long-standing support to address a critical regional issue – homelessness. HomeWalk is a 5K run/walk held in May to raise funds to help reduce homelessness, which impacts almost 60,000 people in the region, according to the recent homeless count in Los Angeles County.  That number includes 6,282 homeless individuals in the South Bay region, the fourth highest in L.A. County. 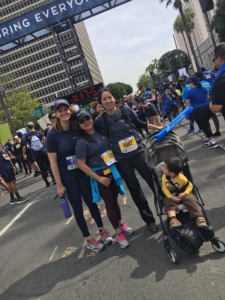 Some members of the TORC team at 2019 UWGLA HomeWalk

Torrance Refinery was one of the first supporters of this event when it began 12 years ago. The Los Angeles Rams joined UWGLA as the presenting sponsor this year. 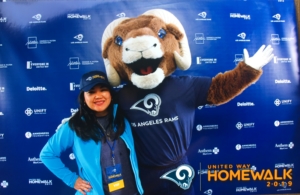 this issue, which is why they’re so passionate about supporting this annual event. “People often identify homelessness with substance abuse, but we know employees, family members and friends who have been homeless, or found themselves at the brink of it, due to unfortunate circumstances,” said Community Relations Advisor Gesuina Lafayette, who also served on the HomeWalk Steering Committee. “I’ve come to realize that homelessness is a complex issue that can affect any one of us at any time and I appreciate that our Company’s contributions and our employees’ engagement can be part of the solution.”

In addition to the Company’s major financial contribution, Refinery employees raised an additional $5,000, which unlocked the Conrad N. Hilton Foundation match and doubled their impact to $10,000 to aid United Way’s housing solutions. TORC also involved other community partners in this initiative, such as Harbor Interfaith Services, who joined Refinery employees and their families at the meaningful, family-friendly event. In total, more than 10,000 participated in the event, raising more than $1 million dollars. This will build upon HomeWalk’s legacy of assisting more than 45,000 people with housing over the past 11 years.

To learn more about this issue and United Way’s efforts, please visit: unitedwayla.org.